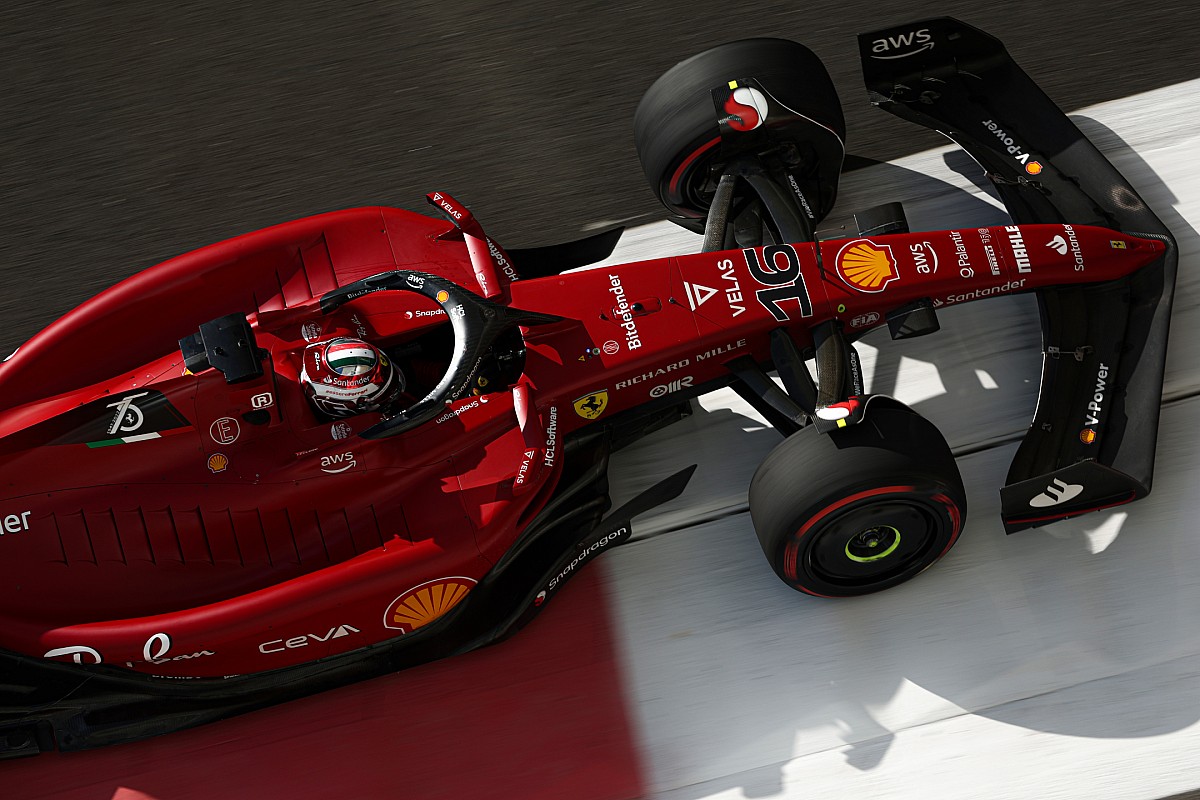 Max Verstappen might have lost his chance to end the 2022 Formula 1 season with a string of five successive victories last time out in Brazil, but he appeared to be in ominous form in Abu Dhabi practice, despite missing FP1.

The now two-time champion was one of eight 2022 regulars to make way for a mix of rookie and reserve drivers, although he soon led FP2 – the only practice session that really matters at this event due to its similar twilight conditions to qualifying and the race.

Verstappen topping the times despite having less track time than his rivals is nothing new – the campaign has notably featured the champion rocketing to top spot even with his first lap coming after a belated start to FP1. However, it was the laps logged by those behind that are most interesting for the season’s remaining storylines.

Topping the bill in Abu Dhabi will be Sergio Perez’s attempt to beat Charles Leclerc to second behind Verstappen in the championship. This scrap is turbocharged by Verstappen’s refusal to comply with team orders in Brazil, which would’ve helped Perez.

Although Leclerc was typically rapid in the qualifying simulation laps that decided the order in FP2 on Friday evening, and Perez ended up a big chunk back from pacesetter Verstappen, the long-run pace logged was poor from Ferrari. Mercedes is also very much in the mix in its more audacious bid to beat Ferrari to second in the constructors’ standings. 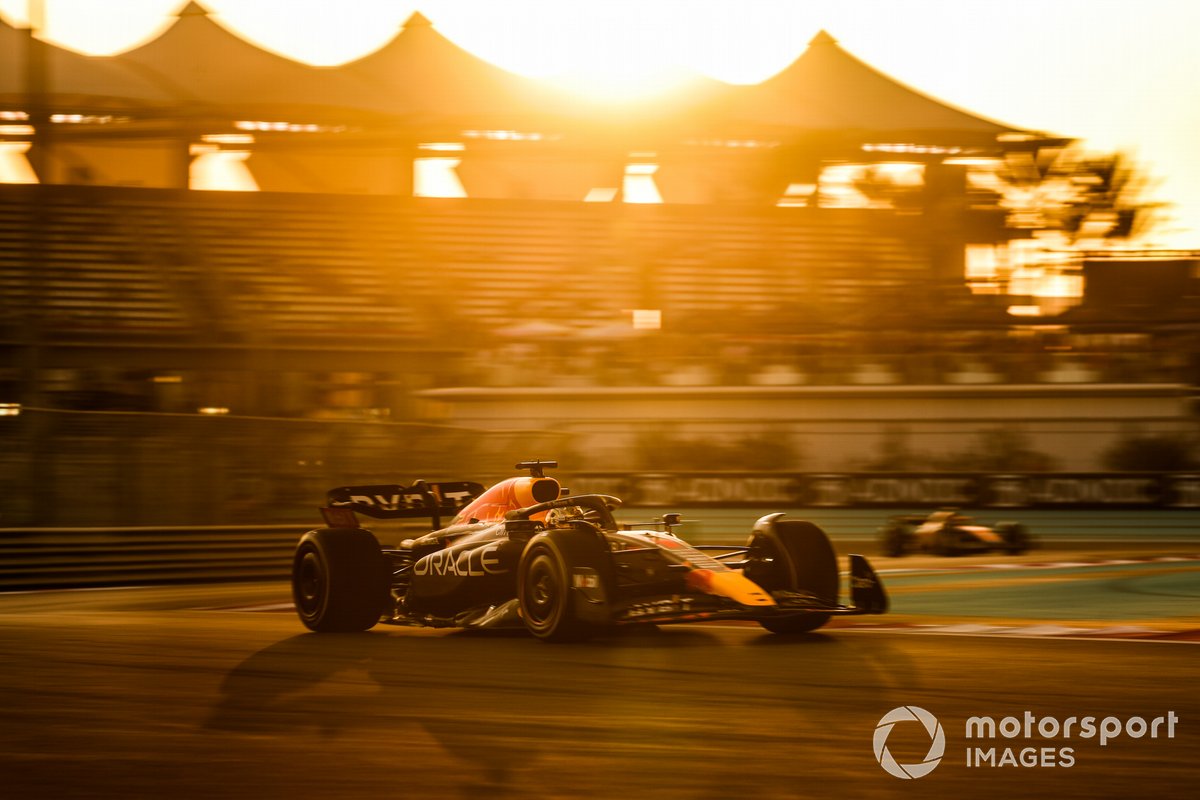 Verstappen looked on top form for Red Bull, with a fight behind him set to take focus

The story of the day

A week on from ending a 21-grand prix win drought with George Russell’s triumph in Brazil, Mercedes led the way in FP1. Under a blazing sun at 2pm local time, the weekend’s opening F1 session got underway, with seven young drivers taking part as several squads completed their requirement to run rookie drivers in two practices – one in each of a team’s cars. At Alfa Romeo, former F1 regular Robert Kubica ran in place of Zhou Guanyu.

The pack initially worked up to speed on the C4 (medium) and C3 (hard) compounds, before Leclerc and Perez traded times at the front after they finally ran the softs for the first time around the one-hour session’s halfway point. Verstappen sat out FP1 for Red Bull, with Formula 2 race winner Liam Lawson taking his place.

Mercedes left Hamilton and Russell on the harder compounds for much longer – only switching to the softs with 15 minutes of FP1 remaining. This appeared to transform their sessions, as the W13s were whipping through the long Turn 5 hairpin early in sector two noticeably quicker than their rivals when on the red-walled rubber, per Autosport’s trackside viewing.

Lewis Hamilton’s 1m26.633s led the way, with Russell 0.22s adrift, and Leclerc and Perez 0.255s and 0.334s behind respectively in third and fourth. FP1 was completed without major incident – bar Logan Sargeant spinning off at Turn 1.

In FP2, Verstappen was on-track immediately. He spent the first part getting up to speed on the mediums as his colleagues had done three hours earlier, with Leclerc going quickest of the drivers running that rubber in the first 10 minutes. At this point, Red Bull made an unusually early call to switch Verstappen to the softs, which he used to go quickest on a 1m25.335s – despite complaining of a mushy brake pedal.

His rivals couldn’t beat this in their qualifying simulation efforts a short while later, although it should be noted that Carlos Sainz was something of an outlier, as his first softs flier was disrupted by coming across Kevin Magnussen going slowly on the racing line. This happened approaching the Turn 9 long left-hand hairpin. Sainz did complete a second go, but at the end of a seven-lap stint with his tyres way past their best. 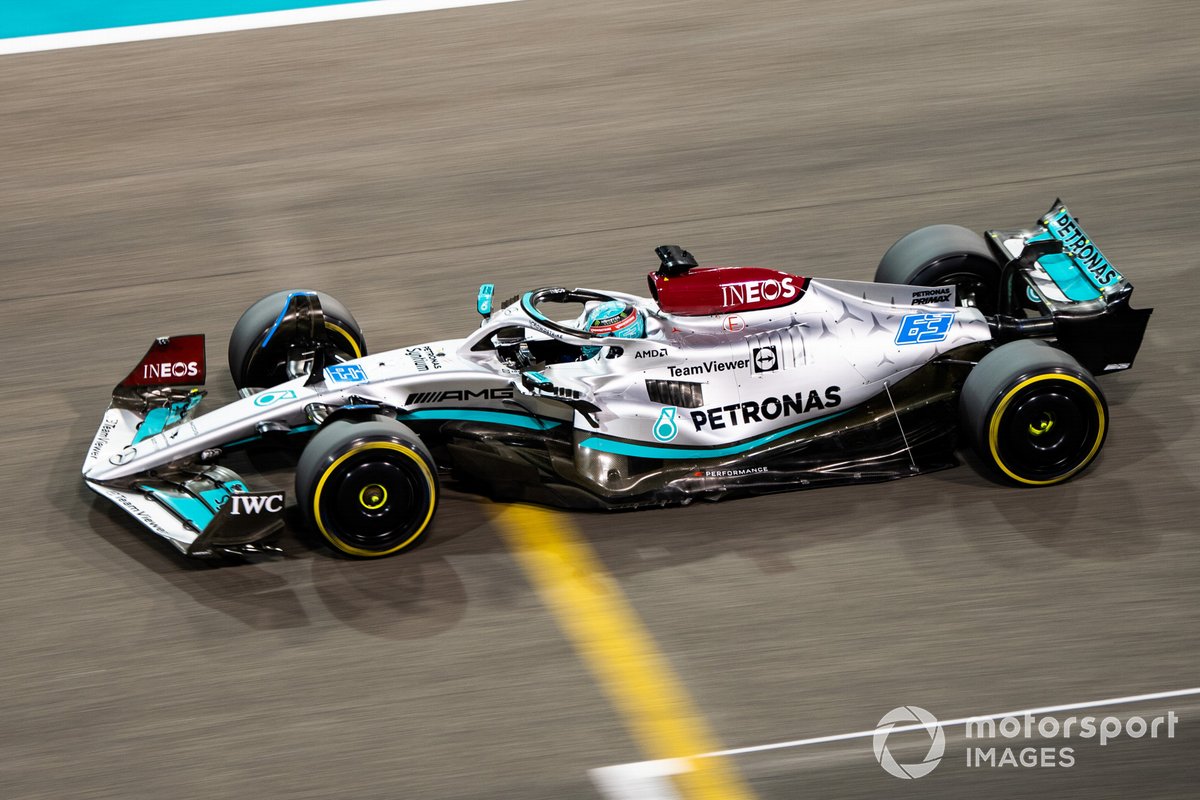 Fresh from his maiden F1 win, Russell led the Mercedes charge on Friday

Russell came closest to Verstappen, despite sliding wildly out of Turn 5 and having to jink through traffic in the final corners – for which his engineer Riccardo Musconi apologised. In response, F1’s 113th and newest race winner quipped back: “No problemo – as long as it’s not there tomorrow!”

That shuffled Leclerc to third, with Hamilton fourth after losing most of his time to Verstappen in the third sector. The seven-time champion struggled with the balance of his W13 more in FP2.

Perez finished fifth, unable to improve his personal best despite getting two more softs runs. Red Bull also gave this additional pure performance running to Verstappen, who had spent all the time since posting his 1m25.335s in the pits. Running a fresh set of softs, he duly bettered his benchmark and ended the day quickest on a 1m25.146s.

In the battle for best-of-the-rest behind the top three teams, Alpine – which holds a 19-point lead over McLaren in the battle for fourth in the constructors’ – ended Friday in a strong position. Esteban Ocon ran seventh ahead of team-mate Fernando Alonso, with Daniel Ricciardo and Lando Norris ninth and 11th, either side of Alfa Romeo’s Valtteri Bottas. 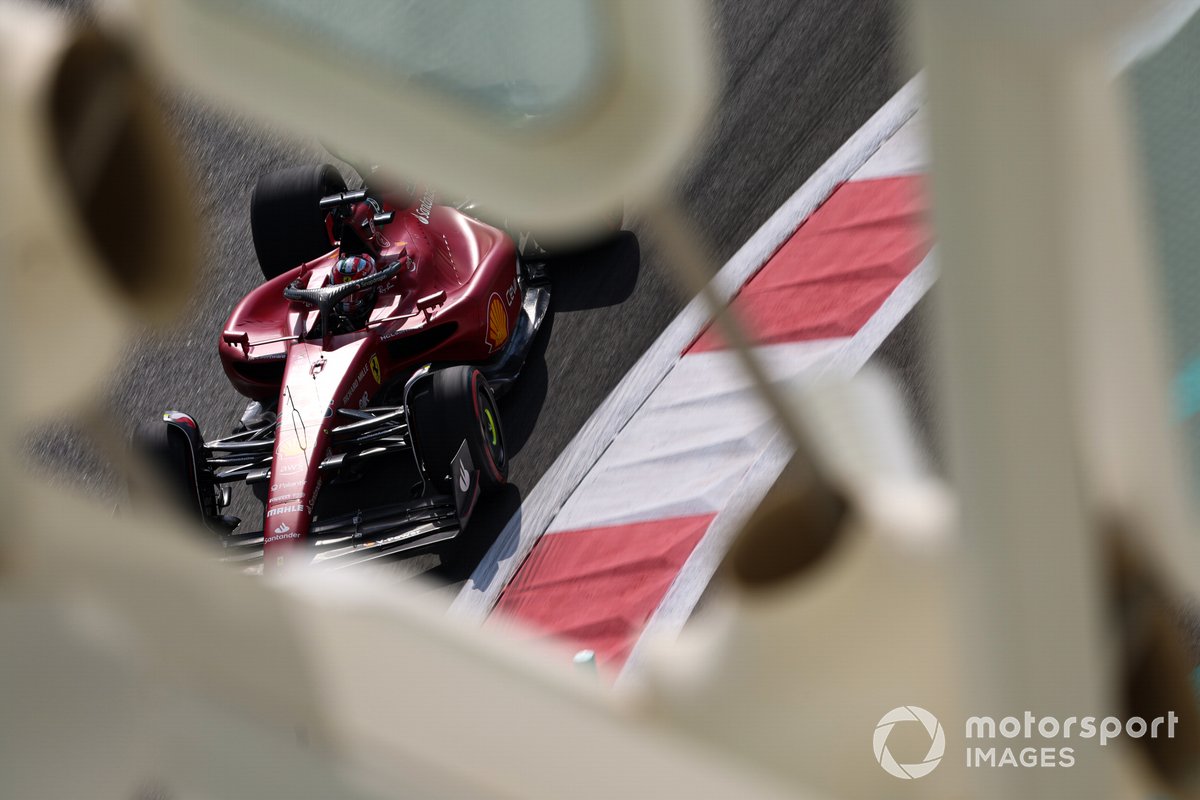 The high altitude in Mexico forced Ferrari’s hand. It had to turn down the turbo, suppressing its appetite for air in order to better preserve the engine. That dropped its drivers nigh on sixth tenths off the pace. The Scuderia was determined to bounce back in the final two races of 2022 to prove this was only a momentary blip arriving in exceptional circumstances.

Granted, the gap to Red Bull and the in-form Mercedes closed considerably last time out in Brazil to just a tenth or two. Overall, though, the red cars again didn’t appear to be the win-threatening force they once were this season. The indication from the comparatively brief race runs in second practice at Abu Dhabi is that the same is true for the season finale.

A scrubbed set of the C4 medium Pirelli tyres was favoured by the leading teams for the long-run simulations in the final 15 minutes of FP2. Only Sainz briefly tried the softs, but he swiftly aired his complaints, and the team pitted its Spaniard for the yellow-walled rubber.

With the level playing field then established, Verstappen was once again the leading light. His seven-lap stint on the compound returned an average lap time that was 0.35s quicker than top Mercedes runner Russell. Perez was only another hundredth in arrears of the recent first-time grand prix winner. The bad news for Maranello was that its charge was headed Sainz (+0.6s), with Leclerc a full 0.85s down on Verstappen, according to Autosport’s calculations.

“We struggled a bit with the race pace due to tyre degradation, which was expected. Our qualifying pace was a little better, but our competitors seem to be a step ahead” Charles Leclerc

Given the championship titles have long since been decided and Mercedes must out-score Ferrari by 20 points this weekend to deprive it of second, the key unresolved matter is the battle between Leclerc and Perez for the runner-up spot. Not least because Verstappen didn’t fall behind his team-mate as instructed to cede sixth place on the final lap in Brazil.

The long runs on the likely preferred medium race tyres should offer the Mexican some confidence initially, given the margin he has on the Monegasque. Running with a slightly fatter rear wing to provide more downforce than his team-mate will also help avoid the RB18 from getting too twitchy through the wide range of corners and speed at the Yas Marina circuit following its 2021 reroute. It is also understood that the Red Bulls weren’t running in their top engine modes, either.

A look beyond the timing screens should also indicate that all is not sweetness and light for Leclerc. He was struggling with the massive stop into the Turn 6-7 chicane as his mediums bedded in. He locked up the inside-left tyre repeatedly, including a string of three consecutive laps. That prompted a question to his race engineer to ask why Ferrari was so slow. The response was not encouraging: “Our pace is not great at the moment”. But at least that owned the malaise.

A crumb of comfort is provided by the tyre degradation, for which sources suggest that the F1-75s are holding onto its grip for longer than the Mercedes. But, ultimately, where Perez versus Leclerc is concerned, it’s behind the Red Bulls in this respect also. 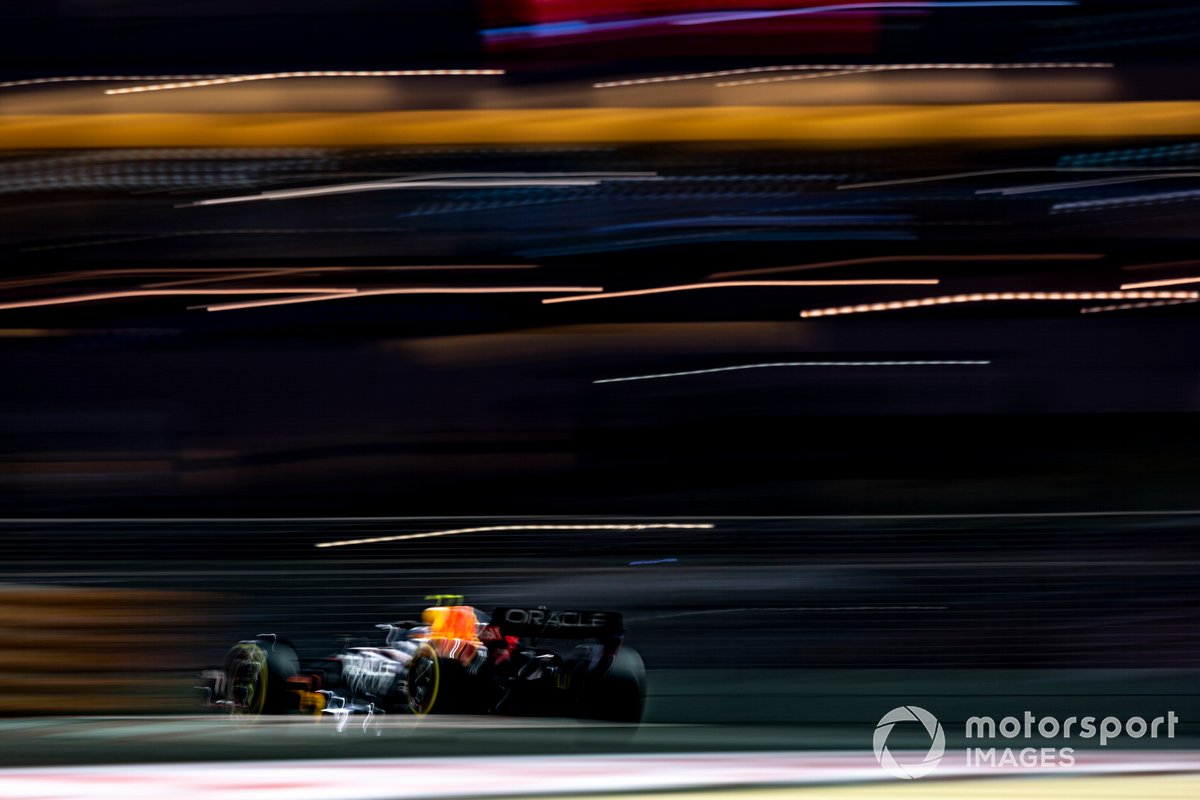 Verstappen reckons: “I’m really happy with how that session went, I think the car came together well. In FP2, we tried a few things. In the long runs, the car was working quite well. Weather-wise, the temperature in FP2 was more representative of what it will be like during qualifying. We should be competitive in quali and the race.”

Perez noted: “The car was good today. It was a very interesting two sessions – very different in the morning to the afternoon. This morning was a bit tricky with the temperatures, which means the afternoon session is the one we really have to pay attention to, because it will be the most representative for the weekend. We are just exploring the balance around the car. We are competitive in the long runs, but we have a bit of time to find in the short runs.”

Leclerc said: “Overall, our sessions were OK. We struggled a bit with the race pace due to tyre degradation, which was expected. Our qualifying pace was a little better, but our competitors seem to be a step ahead.” 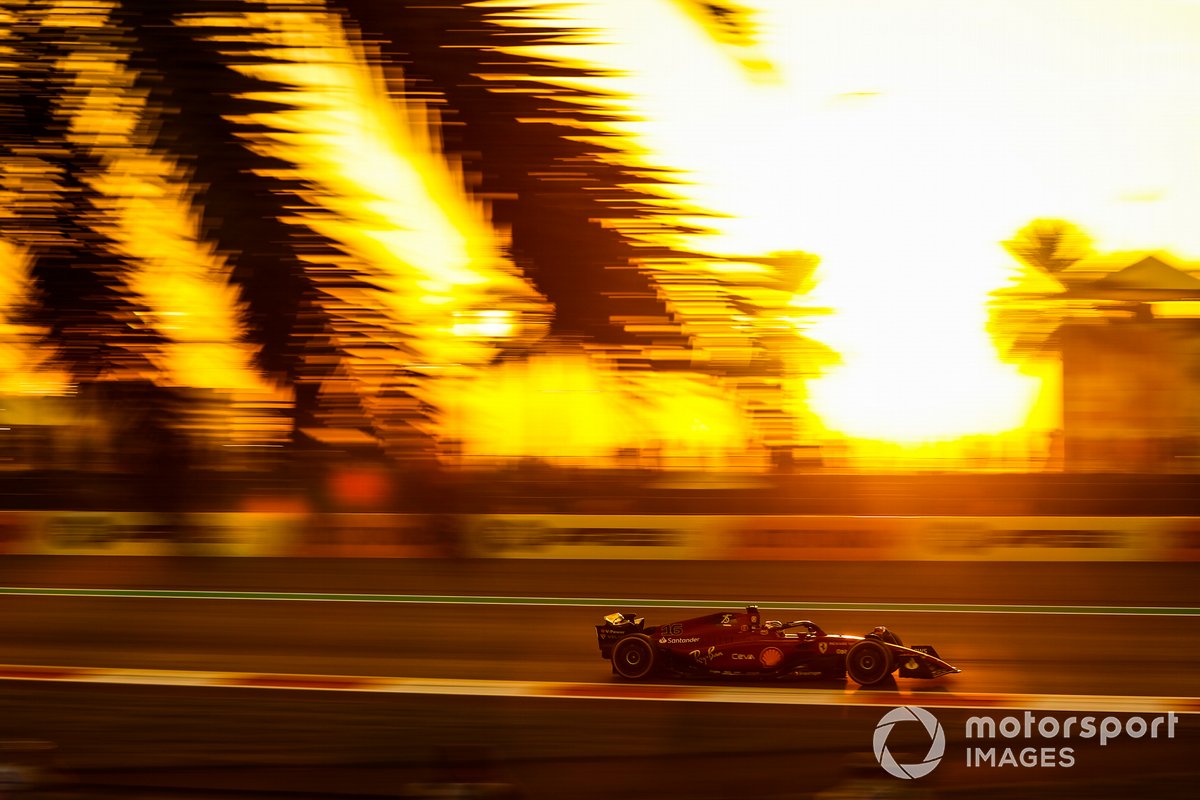 Can Leclerc pull off a turnaround after a tough opening day?