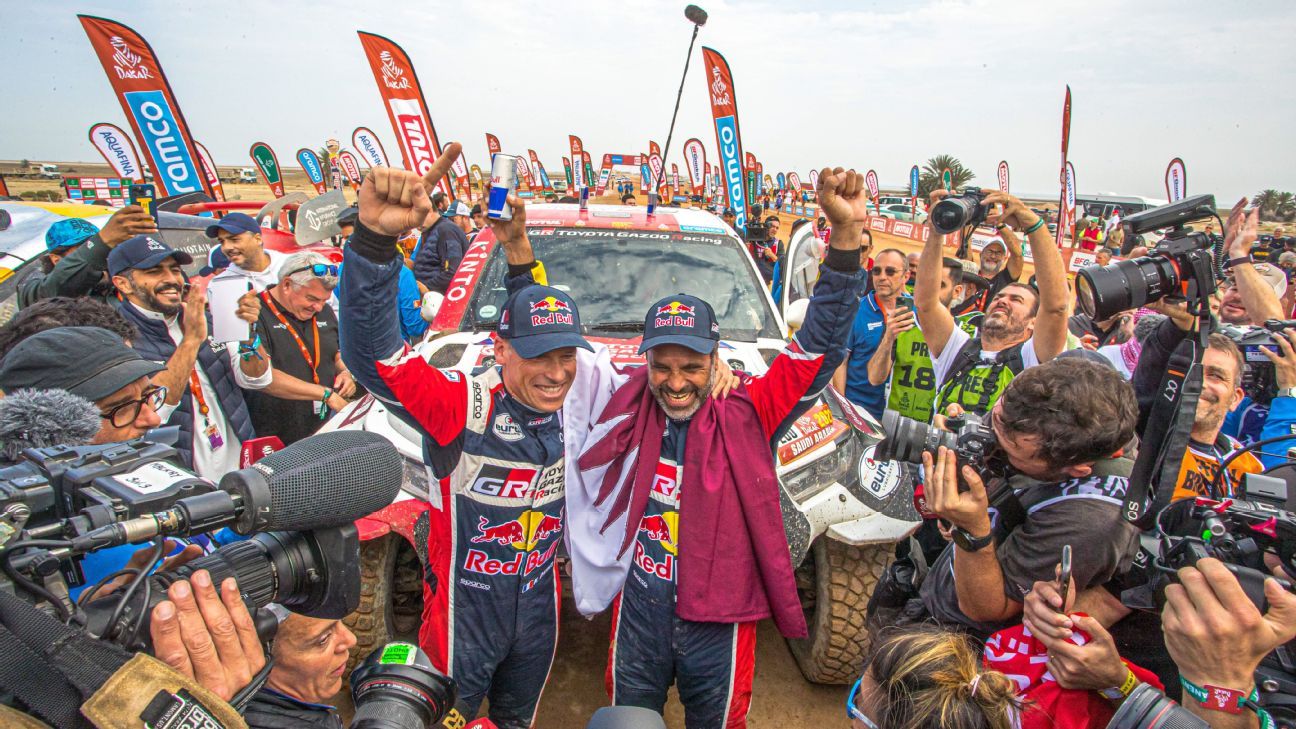 His fifth Dakar title eclipsed Ari Vatanen’s total and was second only to Stephane Peterhansel, the Dakar’s greatest champion with 14 wins, eight in the premier car category.

Al-Attiyah led the Dakar for the last 13 of its 15 days in Saudi Arabia, from the Red Sea to the Arabian Gulf.

Lucas Moraes of Brazil was third, the first rookie on the podium in 35 years. He was 98 minutes back but nearly an hour ahead of fourth place.

Nobody else could avoid trouble like Al-Attiyah and French co-driver Mathieu Baumel in their Toyota. In nine Dakars together, they have won four, been runner-up four times, and abandoned once.

“To beat them, you have to have a perfect race,” Loeb said.

Peterhansel, Yazeed Al Rajhi and Carlos Sainz, the only drivers within 55 minutes of Al-Attiyah, crashed within kilometers of each other. Peterhansel’s co-pilot Edouard Boulanger was taken to hospital with a back injury. Al Rajhi and Sainz were stuck for hours.

Sainz hung on until a second crash on stage nine, which was overshadowed by a spectator dying from injuries after being hit by a truck competitor. It was the fifth death on the Dakar since its move to Saudi Arabia in 2020.

Local driver Al Rajhi, third last year, finished 37th and 37 hours behind Al-Attiyah. Al-Attiyah’s lead ballooned to more than an hour and he no longer had to push hard.

“We didn’t have to attack like crazy,” he said. “We managed to get through the second week and win, that’s what really matters. I’m very happy to win five times, and Mathieu four … sorry Mathieu!”

Loeb was left to win six consecutive stages, a record for an elite car driver, and seven in all, the most since Sainz in 2011. Loeb was runner-up for a second straight year and third time.

Argentine rider Kevin Benavides won his second motorbike title by beating KTM teammate Toby Price by 43 seconds after more than 4,000 kilometers in one of the closest finishes in the rally’s history.

They were the last riders to start the 136-kilometer 14th stage on the coast east of Al-Hofuf.

“This morning, my head was empty except for each kilometer of the stage, from 0 to 136,” Benvavides said. “It’s incredible to pull off the win at the end of this completely crazy Dakar, and with such a small gap. I’m also the first to win with two different motorbike brands, and that makes me very proud.”

Benavides, trailing Price by 12 seconds overall, wiped that out by the first checkpoint. By halfway, he was nearly two minutes ahead of the Australian two-time champion. Price came back but Benavides won the stage by 55 seconds.

He won in 2021 and was up front last year until his engine blew on stage 10. Like Al-Attiyah, Benavides was in the top three from stage three, but made his biggest push on Saturday after stopping to help stricken teammate Matthias Walkner, the 2018 champion.

The Associated Press contributed to this report.